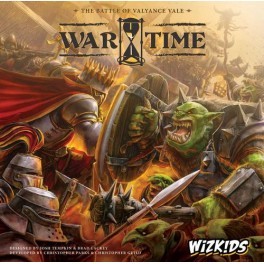 Wartime: The Battle of Valyance Vale

Valyance and Firebrand have gone to war! Units clash in the skirmishes, but the fight is gritty, with little time to think and plan as sand timers dictate the activation of your units. When a unit moves, attacks, cast spells, or uses a special ability in Wartime: The Battle of Valyance Vale, a sand timer is flipped. The unit cannot be used again until the sand timer is drained, then that sand timer (or another one) can be used to activate the unit again. Manage your sand timers, as well as your unit actions, wisely. Sand timers come in different times: 30 seconds, 60 seconds, 90 seconds. Scenarios use other timers in time-sensitive missions.

Wartime: The Battle of Valyance Vale features scenario-based play, with branching missions depending on the outcome of the previous mission. Configure your own units to fight in player-designed missions or mix up the unit configurations when playing the game's missions.