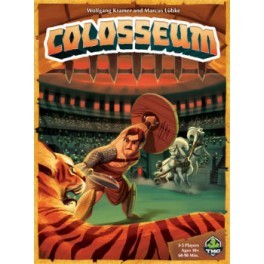 In Colosseum each player is a Roman impresario - producing great spectacles in his or her arena in the hopes of attracting the most spectators. Players earn wealth and glory for each event run, using it to create ever more ambitious events. They will need to improve their arena, find the best performers, lure the Emperor and his nobles, and manage assets for long-term success to
be granted the title of Grand Impresario, with tales of your extraordinary spectacles acclaimed throughout the empire. As a master impresario you have prepared for this moment your entire life. Titus himself has taken his seat in the Emperor’s Loge. At the drop of his hand, the final spectacle will begin. Your moment in the sun has come...