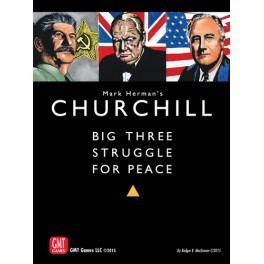 By late 1942 the Axis had been stopped at Stalingrad, El Alamein, and Guadalcanal.  With Axis expansion halted and Allied victory only a matter of time and resources Churchill, Roosevelt, and Stalin began to focus on how to shape the ensuing peace to their advantage. Churchill is a game about the inter-Allied conflicts that occurred over the Conference table as each side vies to control the Allied agenda and the course of things to come.

The players in the game take on the roles of Churchill, Roosevelt, or Stalin as they maneuver against each over the course of six Conferences that determine who will lead the Allied forces, where those forces will be deployed, and how the Axis will be defeated. The player whose forces collectively have greater control over the surrendered Axis powers will win the peace and the game.

Churchill is a three player game of Coop-etiion where the players must cooperate to win World War II, while at the same time achieving a superior post war position over your allies. If the players collectively fail to defeat the Axis the Allies lose, but if the Axis are defeated, there is a victor of the peace that follows. There is also a two player and solo variant.

Churchill is NOT a wargame, but a political conflict of cooperation and competition. While the game focuses on 10 of the historical conferences from 1943 till the end of the war these and much of this design should not be taken literally. Before and after each conference small groups of advisors and senior officials moved between the Allied capitals making the deals that drove the post war peace. Each conference sees one of a group of issues nominated for inclusion in the conference. The issues categories are: Theater leadership changes, directed offensives, production priorities, clandestine operations, political activity, and strategic warfare (A-bomb). Each of the historical conference cards independently puts some number of issues such as directed offensives or production priorities metaphorically put on the table, while the players nominate an additional 7 issues. 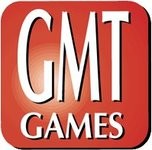